In this beautifully illustrated graphic novel, Italian artist and author Andrea Grosso Ciponte conveys the courage and idealism of the martyred young leaders of the White Rose, a movement of young university students against the Nazi regime in Hitler’s Germany. Without breaking into the narrative with clunky comparisons or editorial remarks, Ciponte dramatizes the personalities, actions, and ideals of the central figures of this relatively small, doomed resistance movement in a way likely to draw young people and stoke in them a similar fire to wage the moral battles of our own day.

The effect of the Nazi era upon Germany and much of the rest of the world was profound and long-lasting—certainly long-lasting enough to traumatize not only the generations that experienced it but also, to a lesser degree, a generation or so beyond. In the early 1960s, as a young child, I witnessed a playmate being berated by a stranger who had overheard him use the name “Hitler” jokingly in play. “Don’t you ever use that word!” he scolded in dead earnestness. “That’s a bad word!” And in truth Hitler was regarded by most people of the time, I think, in almost uniquely demonic terms.

It is understandable that we should have felt that, because, even twenty years after the war (and almost thirty years after Hitler’s ascent to power), we lived among some of his victims, and the wounds he had inflicted remained relatively fresh (the proprietors of the corner grocery store, for example, had numbers tattooed on their arms, and even the youngest of us knew what that meant). In such an atmosphere, ensuring that the Holocaust would never be forgotten and therefore (an optimistic conclusion!) never happen again seemed capable of achievement.
And in a way, more or less, that goal has up until now been achieved, since we have not yet witnessed another systematic, large-scale attempt to eradicate the Jewish people. In addition, especially in the Western democracies, cultural memory largely retains its horror of the Holocaust, despite the dwindling number of nonagenarians and centenarians with personal experience of the concentration camps or World War II.

But though one historical event cannot match another in every respect, it can sound an echo that we may or may not be sensitive enough to hear. As the saying goes, history doesn’t repeat itself, but it does rhyme. A danger once encountered under particular circumstances, in a particular place, may turn our attention apprehensively in one direction while a contemporary crisis approaches us from our blind side. Mass mistreatment and extermination of ethnic and religious groups has occurred relatively frequently since the close of World War II: in Pol Pot’s Cambodian killing fields, in Rwanda’s slaughter of roughly 800,000 Tutsis in 100 days, and in China’s current treatment of the Muslim Uighurs, to name a few. These are horrifying occurrences, but, perhaps because they have not occurred in one of our cultural homelands and we have not been dragged directly into these conflicts, they do not exert the same traumatic effect upon most Westerners. What is distant, whether spatially or chronologically, is usually blurrier, and therefore likely to have reduced impact on us, unless we are propelled beyond such natural limitations by, for instance, great art or storytelling.

Unfortunately, post-World War II history has been rhyming the Holocaust for decades in ways our society (and that of other modern “civilized” nations) finds it difficult to recognize. For close to fifty years, for example, many prolifers have attempted to point out the obvious in referring to the body count of the sacrificed unborn as a holocaust, but most of our adversaries dismiss this use of the term as a false comparison that exploits and cheapens the original.

Another modern-day doorway to death with links to the Nazi regime is legalized euthanasia and assisted suicide. Sadly, in our post-World War II times, legalized euthanasia arose first in the Netherlands—one of the nations that suffered most from the invading Germans and offered many instances of resistance to their extermination of Dutch Jews. In the decades following legalization, without adopting the term “Lebensunwertes Leben” (“life unworthy of life”), the Dutch (and, almost simultaneously, their neighbors the Belgians) adopted criteria for euthanasia and assisted suicide based on that very concept, and have loosened official and unofficial standards, until today the deaths of even handicapped and ill children can be justified. More recently Canada has allowed voluntary euthanasia and assisted suicide, and several U.S. states have passed various forms of assisted-suicide laws. Meanwhile, hospitals and medical boards—and the courts these cases are brought to—have resolved many life and death decisions in favor of death when the perceived quality of life of the patient is deemed unacceptable.

In such a world Freiheit!: The White Rose Graphic Novel, has a lot to say to us.

Freiheit! (the German word for freedom) tells the true story of a small group of German university students who, in the brief period from June 1942 to the leaders’ capture in Feb. 1943, wrote and disseminated a series of anti-Nazi leaflets urging active resistance to Hitler’s government. After their capture, the five leaders who are the protagonists of this book (Sophie Scholl, 21; Hans Scholl, 24; Christoph Probst, 23; Alexander Schmorell, 25; and Willi Graf, 25) were fruitlessly interrogated to reveal additional names and information about their collaborators, tried in court, and executed.

In practical terms, their effort did not bring down the Third Reich or even arouse widespread active resistance to the Nazi regime. But these five young people not only illuminated the consciences and ignited the hopes of some of their contemporaries, but also offered an example of moral and physical courage for future generations—ours, for example—to resist the death-dealing practices of their own times.

As a graphic novel, Freiheit! is naturally pitched primarily at young people: The release accompanying the review copy I received emphasizes that “. . . its message, and the heroism of its leaders, continue to inspire new generations of resisters, who know that while the challenges they face may differ, the need for young people to stand up against evil, whatever the cost, will remain.”
In the prefatory page, Ciponte briefly sets out the circumstances in Germany in 1942 that gave rise to the White Rose: the oppressive Nazi propaganda, Jewish genocide, suppression of opposing views, and a police state where indiscrete words could be reported to the authorities with often lethal results. Living in this unjust Nazi state, the students who will form the White Rose:

. . . ask themselves: Are we the only ones who find our government abhorrent? The lack of freedom suffocating? If only someone will find the courage to speak out, would not thousands of others rise up and put an end to the repression? If we don’t take that first step, then who?

Throughout the following pages, Ciponte’s graphics—beautifully shadowed and shaded frames of a meticulously studied era—recreate the heroes, the villains, and those trying to get by, and the somber world they inhabit. The muted greens, grays, browns, and blacks of the artwork amply suggest the atmospherics of life in a totalitarian country, particularly for those like the protagonists whose Christian faith renders them resistant to its ideology and intent on rousing others to resistance. 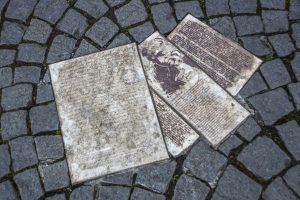 The White Rose produced a total of six leaflets dwelling on the immorality of the Nazi regime and its actions, the impossibility of winning the war, and the necessity for Germans to reclaim their country through passive resistance and sabotage of the war effort. Isolated lines from the leaflets (which are included in their totality at the end of the book) appear in a number of the frames as a kind of backdrop to the dialogue enclosed in traditional graphic-novel bubbles. In the opening frames of Freiheit!, for example, Ciponte runs the following quotations from the first and second leaflets as headings for the illustrations: “Every people deserves the regime it is willing to endure” and “But now the end is at hand.”

The members of the White Rose lived before the era of memes or even soundbites—most of their leaflets ran around 1000 to 1500 words, and, in addition to calls to action and moral argument, incorporated quotations from Goethe, Schiller, Lao-Tzu, Aristotle, and the Bible. The fourth leaflet included this vivid quotation from Novalis, an 18th-century German Romantic poet and philosopher:

Blood will stream over Europe until the nations become aware of the frightful madness which drives them in circles. And then, struck by celestial music and made gentle, they approach their former altars all together, hear about the works of peace, and hold a great celebration of peace with fervent tears before the smoking altars. Only religion can reawaken Europe [and] establish the rights of the peoples . . .

The tone of the leaflets—and at times of the bubble-printed dialogue within the frames—is impassioned and even strident. The authors were seeking not only to convince the German public that the regime was immoral and the war hopeless, but also that their readers must now do something. They sought the fall of the regime and the freeing of those still alive in the concentration camps—but as Germans horrified by what was happening to their country, they also sought to save Germany’s soul.

Although the White Rose leaders were university students, the times they lived in accommodated no ivory towers. For example, a hiatus in the publishing of the leaflets occurred while Hans Scholl and Alexander Schmorell left the university in the summer of 1942 to do tours of duty as soldiers at the Eastern Front. Sophie Scholl is also depicted in Freheit! as working for a time in a munitions factory in her hometown of Ulm, where she deliberately attempts to slow production.

Although the book focuses on the founders of the White Rose, eventually hundreds played a role in supporting them by helping in the production and dissemination of the leaflets to various parts of the country. Many of these collaborators were also captured and put on trial; some were sentenced to prison, and a few put to death.

The graphic novel format does not permit a proliferation of details; however, its strength is in its dramatic quality. Characters share information with each other (and with us) in the course of brief conversations, and scenes change swiftly from the university, to a theater showing Nazi propaganda, to the Russian front, to a meeting of the Gestapo, to the eventual capture of the White Rose leaders and their interrogation, trial, and execution by guillotine. The pacing and swift changes of scene propel the reader along like a well-paced suspense film. Although readers interested in more detailed biographies of the main characters will need to consult more traditional narrative genres, Freiheit! realistically conveys a sense of the comradery, urgent idealism, and tension of the protagonists through its monochromatic coloring and the many scenes—one of them introducing us to the one married conspirator’s pregnant wife and young child—that take place at night. The moody artwork exerts something of the effect of film noir, but unlike most of that genre, the categories of good and evil in this book remain crystal clear.

Plough Publishing House, the publishing arm of the (Christian) Bruderhof Communities, has previously issued other stories of conscience set in a variety of places and times, including Nelson Mandela’s South Africa. This time and place, however, likely hold special meaning for the Bruderhof, since they began in 1920s Germany, and, early targeted by the Nazis for their pacifism, relocated immediately after Hitler came to power. Freiheit!: The White Rose Graphic Novel is a high-quality effort to call a current generation of young Christians to resist, peacefully but eloquently, imaginatively, and resolutely, the regnant evils of their own time.

—Ellen Wilson Fielding, a longtime senior editor of the Human Life Review, is the author of An Even Dozen (Human Life Press). The mother of four children, she lives in Maryland.

—Ellen Wilson Fielding is a senior editor of the Human Life Review.