Fighting for Life in Ireland

This day brings fond memories of many happy celebrations at the McFadden’s New York City apartment, which was next to the parade route. My parents welcomed family and friends for what was truly a multi-cultural event: German food, because my Dad’s mom was German and Italian and we lived in Yorkville, which had the best German stores; Irish soda bread and Guinness; a bagpiper in full regalia accompanied by my young cousin the Irish dancer–and we often ended the party with Greek line dancing, because my parents fell in love with Greek music and dancing on a trip to Greece in 1963. 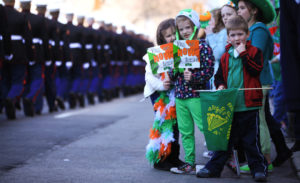 NEW YORK – A contingent of more than 300 active and reserve Marines, Marine Corps League members and Leatherneck Pipes & Drums members from the New York area marched in the streets of Manhattan as part of the 250th St. Patrick’s Day Parade here, March 17. The Marines marched more than 30 blocks up Fifth Avenue to a shouting and cheering throng of New Yorkers decked out in green for the festivities. (Official Marine Corps photo by Sgt. Randall A. Clinton / RELEASED)

‘Twas fitting: Everyone is Irish on St. Patrick’s Day in the great melting pot of NYC, though the pandemic and lockdowns are robbing us of our marvelous parade for the second year. For lively NYC parade history—and to learn why the “Fighting-69th” leads marchers up 5th Avenue–here is a 2018 NY Post column by James P. MacGuire, author of Real Lace Revisited: Inside the Hidden World of America’s Irish Aristocracy.

Sadly, Ireland itself is no longer what it was: one of the safest places on earth for the unborn and their mothers, as Irish journalist and media personality David Quinn reminds us in the current issue of the Human Life Review. Though in 1983 Ireland took the unique step of amending her constitution specifically to protect unborn children, that amendment was rejected and abortion legalized in May of 2018. Quinn describes a ghastly celebration, an awful “template” to be echoed by Gov. Andrew Cuomo in NY months later:

On the day of the result, crowds of ecstatic pro-abortion campaigners gathered in the courtyard of Dublin Castle, one of Ireland’s main public buildings, to celebrate. They shouted and roared and literally wept with delight. If was as if Nazi Germany had just surrendered, or the Berlin Wall had fallen. In their minds, something incontestably good had happened. It was black and white, a simple matter of good triumphing over evil. The Taoiseach (Prime Minister) and Health Minister gathered on the balcony above the courtyard to accept the acclamation of the crowd. No thought was spared for the almost three-quarters of a million Irish people who had voted to keep the pro-life amendment. They had been defeated and that was that. History had come along and swept them into its dustbin.

As Quinn remembers this capitulation to the culture of death, he warns of another approaching the Emerald Isle: the legalization of assisted suicide and euthanasia.

Now that abortion is in the bag, the time has come to move on to the next item on the agenda: assisted suicide. Pro-life campaigners warned this would happen. They were accused of scaremongering by their opponents. They were told the issues of abortion and assisted suicide were completely different from each other, without ever really being offered an explanation of why this was so.  . . . .

But nothing in our Constitution prevents the Dail from voting in favor of assisted suicide. In fact, a few years ago the Irish Supreme Court explicitly told politicians that they could do so. A case had come before the court involving a woman who had advanced MS. She wanted to be allowed to avail herself of assisted suicide, or “medical assistance in dying” as they like to call it in Canada. She claimed her right to privacy was being violated. The court ruled against her but expressed full sympathy and basically told politicians it was up to them now to decide what to do. This was before the abortion referendum, which the Government wanted to get out of the way first. Therefore, assisted suicide was put on the backburner, but, given the scale of the pro-abortion victory in May 2018, those who also back assisted suicide were emboldened.”

The Irish “Dying with Dignity” bill has now advanced to the committee stage. In a recent column in the Irish Times, Breda O’Brien writes about a conference held by the anti-euthanasia group Hope Ireland, where palliative care experts and people with disabilities voiced grave concerns that the road to euthanasia would be not “so much a slippery slope but a push off a cliff” for the vulnerable.

For more about the Irish Death with Dignity Act and many other issues on life and religious liberty in Ireland, visit the Iona Institute, whose director, David Quinn, was honored with our Great Defender of Life award in 2018. 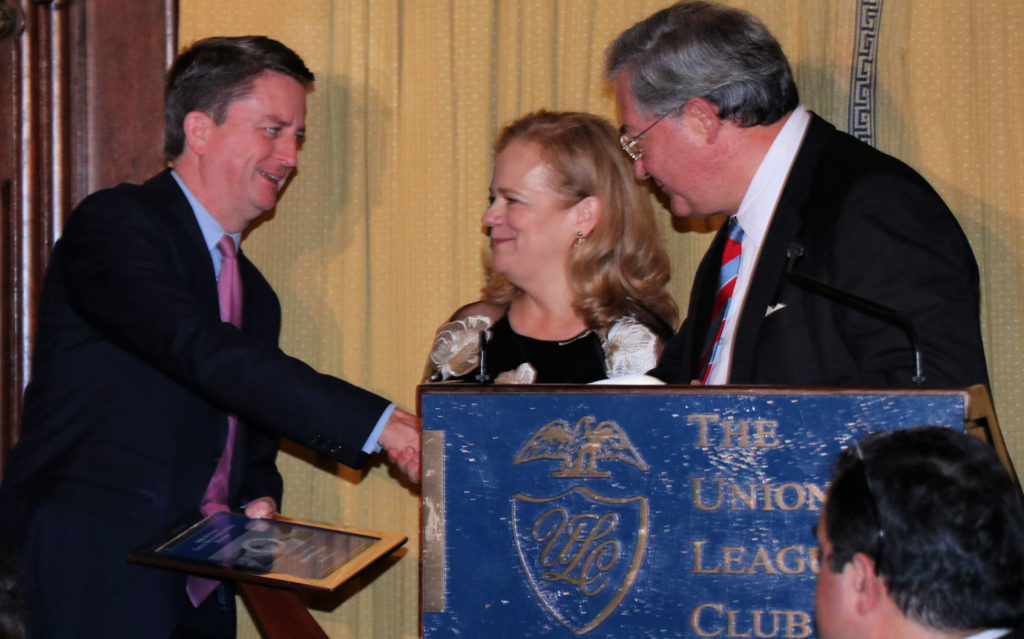 Maria and Board Member Jim McLaughlin present David Quinn with the Great Defender of Life Award, 2018