HOT TOPIC: Diane Moriarty on All Our Children, playing now at the Sheen Center! 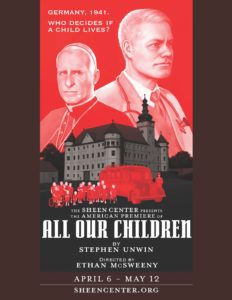 All Our Children, written by Stephen Unwin and presented by the Sheen Center for Thought & Culture (now until May 12), is a play about the exterminating of disabled children and young adults in Nazi Germany. They weren’t packed into cattle cars, taken to concentration camps and worked to death, they were put on buses with the windows painted gray and brought directly to crematoriums. The painted windows were so people wouldn’t have to look at them. Even in our own country, right up to the 60’s, disabled people were discouraged from appearing in public because it made the able-bodied uncomfortable, and abortion was always permissible for women who were blind, lame, or mentally retarded. So being repulsed by the bent, the crooked, the slack jawed is nothing new, but in Nazi Germany being unemployable was considered an inexcusable burden on the state.

Director Ethan McSweeney has placed the stage in the middle of the room at eye level; the audience surrounds it. All the action takes place in the office of Dr. Victor Franz (Karl Kenzler), the chief pediatrician of the facility that houses the children until they go on the little school trip they never return from. It’s a cozy room with arm chairs, Turkish rugs, coal burning stove, and littered with brandy bottles from the night before. The doctor drinks. And chain smokes. He’s an affable man of considerable charm who is doing battle with his hunkered down conscience. Tall columns of file cabinets are everywhere you look, including the audience. We are all in the set.

The doctor has, and holds, the stage for the entire play. Martha (Jennifer Dundas), his kind hearted maid, Herr Schmidt (Sam Lilja) the 22 year old insufferable prig who’s the chief administrator, Frau Pabst (Tasha Lawrence) mother of one of the “patients,” and Bishop von Galen (John Glover) come and go, but the doctor is the huge yet quiet personality they all come to see; to pamper; to badger; to entreat; to convert.

One of the advantages of being so close to the stage is being so close to the actors. Each face a canvas. The doctor whose gregarious smile is ever on the verge of crumbling from the inner doubt and guilt crouching behind twinkling eyes; Herr Schmidt in an idle moment, his dulled expression a precise rendering of a man thinking and feeling… nothing! Martha, the embodiment of happy housekeeper to a man she esteems the moment it’s revealed what the clinic is really up to; Frau Pabst imploring the doctor to let her see her son while imploring us to also believe that he’s being helped and well cared for while trying to hold back a tsunami of suspicion with an umbrella; the Bishop’s patient gaze turning furious when he’s had enough of the aforementioned insufferable 22 year old prig and announces the focus of his forthcoming sermons. (Bishop Clemens August Graf von Galen is known as “The Lion of Munster” for his courageous and powerful anti-Nazi stance.)
The housekeeper’s admiration for the doctor has blinded her. When the Bishop throws down the gauntlet she sees the truth and comes to her senses, and it’s her impassioned plea that awakens the doctor’s bottled-up conscience.

This is an important play with a message that’s true for any age or decade, namely that being allowed to hate is the single most dangerous indulgence known to human kind. This cast of outstanding performers guarantees a theater experience you will never forget.
For information and tickets, go to www.sheencenter.org. 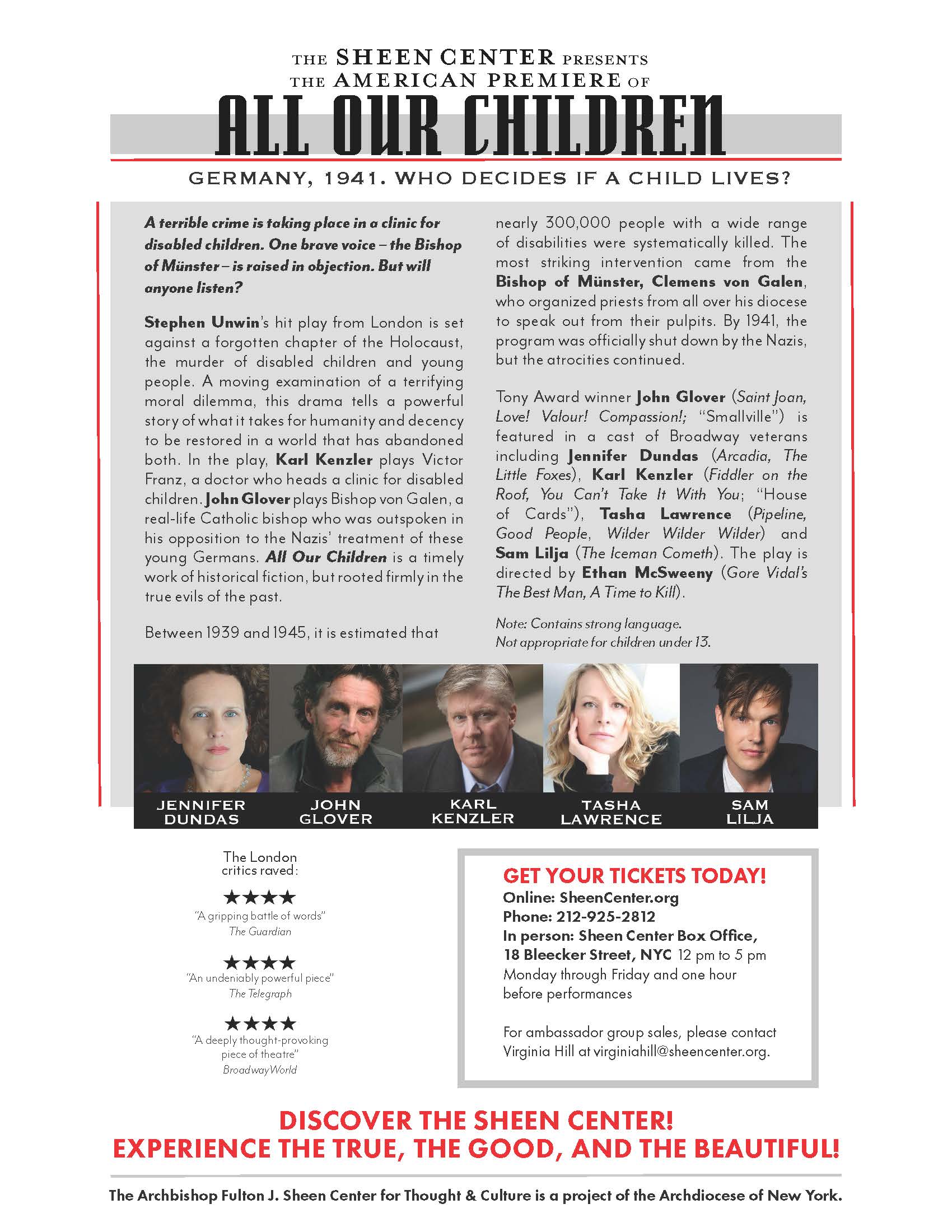 Diane Moriarty is a free-lance writer living in Manhattan. Her story, “Wish You Weren’t Here,” was published in our Fall, 2016 issue.