Silly-Clever Pro-Choice Arguments, and How to Take Them Down

It was an example of the kind I call “silly-clever,” borrowing the term from George Orwell. He used it in criticizing the work of the major Christian apologists of his day, including Chesterton and Lewis. (I don’t think his argument against them is very good, for what it’s worth.)

The pro-choice meme began: “Here’s a test. I’m holding a baby in one hand and a petri dish in the other. I’m going to drop one. You choose which.” It continued: “If you really truly believe an embryo is the same thing as a baby, it should be impossible for you to decide. You should have to flip a coin, that’s how impossible the decision should be. Shot in the dark, you saved the baby. Because you’re aware there’s a difference. Now admit it.”

It’s “silly-clever”: clever because the assertion seems a legitimate “gotcha” point—one that takes down the other’s side’s argument in just a few words—and silly because it’s actually just silly. You may feel its force at first, but when you think about it, you see how dumb (or frivolous or specious) the argument really is.

But still, few prolifers can refute the good silly-clever claim efficiently and quickly. It leaves most of us not knowing what to say, and the speaker beaming with triumph. It feels like the other team kicked the winning field goal just as time ran out, and all you can do is slump back to the locker room.

Most of these memes, like the one we’re talking about, include a big “gotcha” effect. The people who agree with the claim like it because it says what they want to hear and shows (they think) how foolish or stupid are the people who don’t agree.

Other times, we know how the claim is wrong, but don’t know how to explain that without trying to explain the nature of free will, the moral law, the problem of evil . . . while the memer just smirks. Two pro-life philosophers, my friend Robert P. George and Christopher Tollefsen, wrote an excellent refutation of a similar silly-clever argument, but it’s 2,047 words long. Presented with a response like this, the memer has long since rolled his eyes and left. A lot of people who want to see the meme refuted have also left.

And of course we often have the problem of people who agree with the meme and think there is nothing we can possibly say that will disprove it, so they either won’t listen or won’t stop talking. They also feel they’ve kicked the winning field goal as time ran out, and expect us to leave the field while they celebrate.

Now let’s look at two very good examples of how to refute this meme.

The writer Kate Cousino wrote in response to my posting the meme on Facebook:

The meme depends on people either not recognizing or admitting the truth of Cousino’s observation. “None of those instinctive, unconscious biases reflect anything real about the inherent value of people who are different, less recognizably sympathetic, less recognized as ‘one of us’ at the subconscious level,” she continues. “This is the point of the inherent bias test—to make us realize that our unconscious biases frequently run counter to our conscious values, to remind us of the need to be mindful and not let the primitive hindbrain run the show.”

They usually correct the memes with a red pen and turn the pro-choice argument on its head. And as it happens, they rewrote this one . Here’s their version: 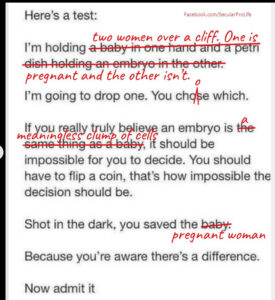 How do Cousino and Secular Pro-Life do it? Cousino doesn’t give a memed response. She needs 144 words. Not many, though, and few enough that people will listen. She accepts the meme’s claim. (I think most of us would want to start our response by trying to deny it, but that won’t work because the meme’s right.)

She then points out that though generally true, the claim doesn’t address the real question. The real question doesn’t concern our motives in choosing what we choose, but the inherent value of the people we’re talking about. She explains why we might choose what we choose, which has the effect of further undermining the meme.

Cousino then does something most of us probably wouldn’t think of doing. She refers to an objective standard, one the memers themselves will accept. It emphasizes society’s interest in uncovering such biases in order that we not act on them. This insight generally applies to racial prejudice, but it applies just as much to the erasure of the humanity of the unborn child. It’s almost a “Gotcha!” itself.

Secular Pro-Life does give a memed response. As I say, they’re good at it. They rewrite the meme as if they’re correcting a student’s paper. They simply flip the argument into the same kind of “Gotcha!” argument, but one the pro-choicers can’t answer without contradicting their own beliefs. They invalidate the argument by using it against the pro-choicers.

Most of us aren’t as insightful as Cousino or as clever as Secular Pro-Life. We’re blessed to have people like them defending the life of the unborn. But we can learn from their example and practice doing what they do. Some of us may find we can do the same thing, if we follow models like these.

David Mills, former editor of Touchstone and First Things, is a columnist for OSV, the National Catholic Register, and other Catholic publications.