Pastor Tsujioka Kenzo passed away on December 16. He was eighty-nine years old.  My friend and fellow pro-life advocate Vincent Kato let me know as soon as he found out. Just a week before, Vincent had shared photos of a Prolife Japan Christmas gathering with me. Pastor Tsujioka, Prolife Japan’s founder, was there. He started the organization in 1984, and since then it has grown into an important center of the pro-life movement in this country.

The Japanese name of Prolife Japan is “Chiisana Inochi wo Mamoru Kai,” or “Society to Protect Tiny Life.” That was Pastor Tsujioka’s mission. He was a gentle warrior, a man who devoted his life to caring for others. Right up until the end, Pastor Tsujioka was giving his time and energy for the unborn.

Pastor Tsujioka was also a founder of the March for Life in Tokyo, along with Ikeda Masa’aki. Every year from the first March in 2014 until 2019, Pastor Tsujioka was out walking with a hundred or so other prolifers in the brutal July heat, even when he was too frail to stand for very long unassisted.

But the March for Life was only a small part of what he did for his brothers and sisters in need. In a brief piece about Pastor Tsujioka published here almost a year ago, I wrote that Pastor Tsujioka was “a Godly gentleman who has done pro-life work in Japan for decades and has personally been involved in the adoptions of many children into loving Christian homes.” That is so very true. He and his wife Toshiko—and his many friends, parishioners, and fellow pastors—joyfully took care of pregnant women and their children, loved them as brothers and sisters in Christ. Pastor Tsujioka found homes for children who had none. His loving-kindness inspired others, too, to take in the unwanted child. Through his witness and good works, society was made better. And most of us never even knew it.

Pastor Tsujioka also did pro-life work that was more visible than opening his home and heart to at-risk mothers and their young ones. He was part of an international pro-life network, for example, welcoming Jack and Barbara Willke to Japan for the second World Congress for Life in 1991.  Pastor Tsujioka was friends with film director Chiba Shigeki, who made a documentary about Mother Teresa in 1978 and met the subject of his film during her visit to Japan in 1981.  For nearly a month in early 1998, Pastor Tsujioka traveled around the United States, expanding connections between Prolife Japan and the rest of the world.

But Pastor Tsujioka did his most powerful life-saving work in Japan. In addition to placing children in adoptive homes and caring for them and their mothers along the way, he helped convince an obstetrician and gynecologist named Dr. Kikuta Noboru  to stop performing abortions. Dr. Kikuta eventually became a Christian and worked to reform adoption laws in Japan, making it easier for couples to take in unwanted children and raise them as their own.

Prolife Japan announced the passing of Pastor Tsujioka in a post that also gave the date, time, and place of his funeral: December 20, 2022, at Nakanoshima Christian Church at one o’clock in the afternoon. Pastor Kokubu Hiroshi led the services. My friend Vincent Kato, who attended, tells me—and photos and video from the day amply confirm—that the church was packed with people paying their respects to Pastor Tsujioka. Many more watched the funeral online—more than seven hundred views so far.

Pastor Tsujioka’s wife spoke at the funeral. “It was the grace of God,” she said, “that, because of Prolife Japan, so many women and their babies were able to come into our home.” I do not know how many lives Pastor Tsujioka and his organization saved. Perhaps God alone will ever know the number.

In the photos Vincent sent me of the Prolife Japan Christmas gathering on December 9, Pastor Tsujioka is in a wheelchair. His face has the drawn and absent look of advanced age. It is clear that his own life is coming to a close. But in those photos Pastor Tsujioka is surrounded by loving people. It is only fitting for a man whose existence was given to celebrating the wondrous fact that God had created human beings.

Photos Vincent shared from Pastor Tsujioka’s funeral show a table in the Nakanoshima Christian Church’s reception hall filled with pictures from the departed’s long and full life. In almost every one of them, Pastor Tsujioka is with someone, smiling brightly, radiating Christian love for his fellow human beings.

There was an older photo displayed on the table, too, of Pastor Tsujioka with Dr. Kikuta. Dr. Kikuta is holding an infant in swaddling clothes. Dr. Kikuta is smiling too.

In two of the funeral table photos, Pastor Tsujioka is alone, with a serious expression on his face, a stark contrast from his usual sun-like smile. He is reading his Bible. So, as Pastor Tsujioka would have insisted, he is not really alone in those photos after all.

Another photo from Pastor Tsujioka’s funeral reception shows a small decorated card on which Pastor Tsujioka had written a short note about one of his favorite sayings. 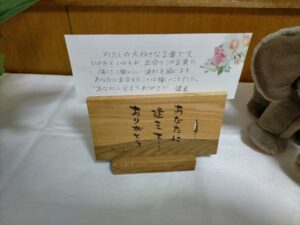 That saying, inscribed in a carved wooden stand holding the decorated card, reads:

Pastor Tsujioka explains in his handwritten note: “I feel a sense of gentleness, divine favor, and warmth in this favorite saying about life encountering life. I am so happy that I was able to meet you.”

May Pastor Tsujioka Kenzo, gentle warrior and protector of women and the unborn, meet God now after a life spent meeting, and loving, His finest handiwork.