Prolifers and pro-choicers occasionally attempt to fortify their arguments by invoking older moral disputes. Prolifers echo Vietnam-era anti-war protests when they call pro-choicers “baby killers.” Calling pro-choicers “eugenicists” insinuates a similarity to Nazis and earlier supporters of social Darwinism. Pro-choicers respond in kind, calling us “Hitlers” for our alleged authoritarianism or “Jim Crow advocates,” implying we treat women the way segregationists treated blacks. The name-calling is not very persuasive—on either side. Nevertheless, I’d like to invoke an even older moral dispute and suggest that pro-choicers, and sometimes prolifers, can resemble the Sadducees of ancient Judea. Bear with me for a few paragraphs, while I explain.

The Sadducees—one faction of ancient Judaism—were strict Bible-only believers: God spoke through Moses, who wrote the Torah, i.e., the books of Genesis, Exodus, Leviticus, Numbers, and Deuteronomy. Unlike the Pharisees, who believed that God also revealed himself in the “oral Torah” (the developed rabbinic commentary on the written Torah), the Sadducees preferred to ignore commentary, creating conflict between the two groups. 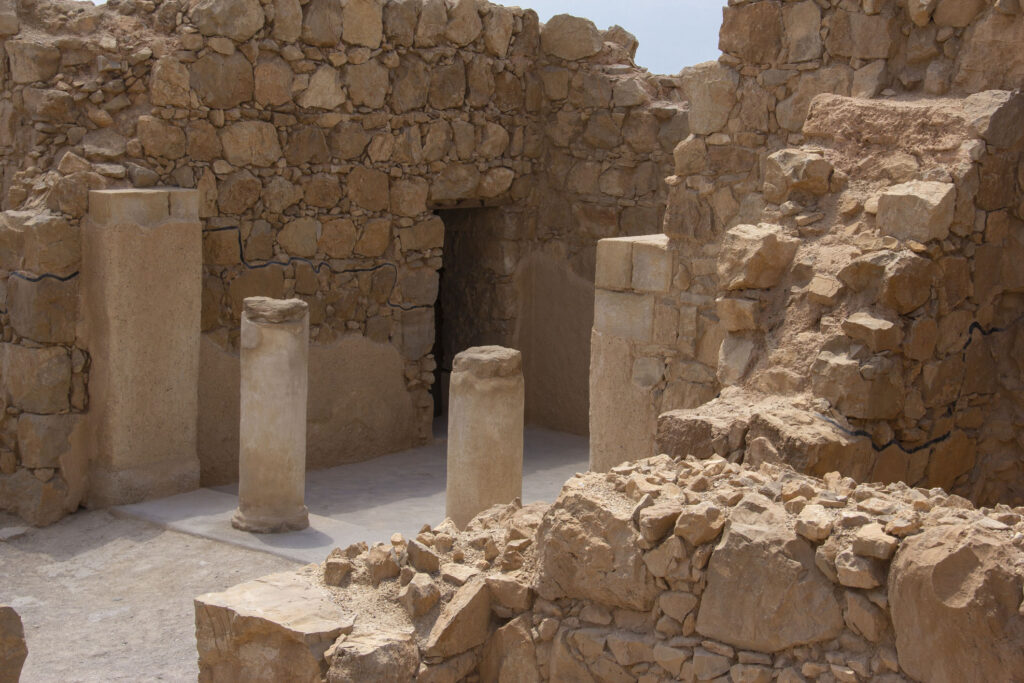 Columns at the entrance of ancient buildings in Masada. Masada is an ancient fortification on top of an isolated rock plateau overlooking the Dead Sea. It is a highly symbolic site due to its history of resistance by Jewish zealots, faced with a siege by Roman forces.

The Sadducees also opposed the Zealots, a political faction that protested the Roman occupation—sometimes violently—out of concern that in accepting Greek culture Jewish religion and identity might pass away. The Sadducees, however, controlled much of Jerusalem, and, seeking to maintain their power and to protect the Temple, cut deals with the Romans to limit the Zealots’ power.

The Sadducees resented Jesus, whose followers, they thought, often acted like the Zealots, claiming Jesus was the long-awaited Messiah who would raise an army to destroy the Romans and establish a Jewish theocracy. Never mind that Jesus raised no army; the Sadducees held him responsible for the worst expressions of messianism, much as contemporary prolifers and pro-choicers hold everyone on the other side responsible for the worst extremists in their camp.

In Luke 20, the Sadducees present Jesus with an argument that resembles some exchanges between prolifers and pro-choicers on social media. “What if a woman had seven husbands? Whose wife will she be after the resurrection? Duh, it makes no sense. Therefore, there can’t be a resurrection!” The Sadducees weren’t really asking Jesus a question. They thought they already knew the answer, and were simply trying to embarrass him.

This kind of argumentation—and maybe social media interaction more generally—abounds in foolishness of biblical proportion: the kind of stupidity that makes us wicked mixed with the kind of wickedness that makes us stupid. The Sadducees, eager to embarrass Jesus and maintain control, proudly ignore the limits of their own knowledge, and put forward their foolish case. In that sense, they are not unlike pro-choicers, who constantly gloss over the humanity of unborn children and the duties of civil society. But in this they are also like prolifers who go beyond the limits of their own knowledge and attribute to pro-choicers beliefs and motivations that pro-choicers don’t recognize in themselves.

Personal Witness and Arguments from Understanding

Jesus responds to the Sadducees’ foolishness in two breathtaking ways. First, he speaks on his own authority, without appeal to the Bible: “They [i.e., those in heaven] neither marry nor are given in marriage; they are like angels.” Jesus speaks as if he knows this because he is already there, before God, a firsthand witness to the eternal life of those who have died. Second, Jesus makes an argument from Torah: “Moses said God identified himself as the God of Abraham, Isaac, and Jacob, but they had died. God is the God of living, so they must also be alive.”

Some prolifers can bear personal pro-life witness, as Jesus does to the Kingdom of God. Surely, the mothers among us can bear witness to their children and to the drama—and sometimes trauma—of motherhood. Those who serve distressed mothers and children can testify to the beauty of the service, especially under difficult circumstances. But most of us might do better to adopt a posture of patience and compassion, if we have no experience of motherhood or service to mothers.

It’s worth noting that Jesus makes his point by citing the Torah, the one text the Sadducees accept as authoritative. It’s a style of argument that is also a kind of outreach, as if to say, “Okay, since this is what you believe, let me start with you there, and walk you through from there to where I am.” Let’s be less like the Sadducees and more like Jesus. Spending time listening to pro-choicers, and trying to understand their positions, might be a more fruitful approach to changing their minds and hearts than simply filling social media with arguments we think are clever.

Fr. David Poecking is the pastor of Archangel Gabriel Parish in the Catholic Diocese of Pittsburgh.