Behind and Beyond the Shout for Abortion

[Richard Stith is professor emeritus of law at Valparaiso University in Indiana and a member of the board of the Consistent Life Network, on whose website (https://consistent-life.org) the following article appeared on April 4, 2020. Adapted from an article first published by Mercatornet on March 28, 2022, it is reprinted here with Mr. Stith’s permission.]

The US Supreme Court in Planned Parenthood v. Casey (1992) stated in support of abortion that the “ability of women to participate equally in the economic and social life of the Nation has been facilitated by their ability to control their reproductive lives.”

But laws are not the only impediment to a woman’s choice to abort.

The negation of social as well as legal constraints on abortion is necessary for abortion freedom. Moral qualms (and consequent mental health worries) could stop the choice of abortion. These, too, must be negated in order for women to feel free to abort. Abortion must become a normal part of a decent life.

Women must be made ready and willing to choose abortion if they are to “participate equally in . . . economic and social life” with their male colleagues. Abortion must become ordinary.

To this end, women are being encouraged to speak loudly about their abortions. Shout Your Abortion is a movement working “to normalize abortion through art, media, and community events all over the country,” according to its mission statement. It’s a kind of shame-shaming in which women are exhorted to normalize “terminations,” to see them as an everyday part of life. Its Twitter feed is full of messages like:

• “Abortion is normal. Our stories are ours to tell. This is not a debate.”

• “I aid and abet abortion and will do so proudly and constantly for the rest of my life.”

• “It seems incredibly damaging to label folks who choose abortion as naïve or uneducated or selfish. Or victims.”

From the beginning, as in the basic training of soldiers, shouting was going to be needed to make humans feel good about killing other humans.

Words can go only so far in combating this purposeful hardening of hearts. Closely reasoned arguments and statistics may fail to pierce the defiance of its “iron dome.” There is a thick layer of pain, abuse, fear, loneliness, and anger shielding abortion supporters from the truth.

Perhaps the best way to dissolve this coating is with art. Recall Picasso’s great painting of the carpet bombing of a town in northern Spain, Guérnica (now Gernika). It is a more radical revelation of the horror of war than any textbook.

Where is the art radically uncovering the horror of abortion?

I’d like to nominate the sculpture below: “Triumph,” by Rosemarie Tischer Stith (1973).

Artist Stith, herself a child refugee from the WWII firebombing obliterating Dessau, Germany, foresaw the great shout for abortion way back in 1973, the year a right to abortion was first proclaimed by the US Supreme Court. 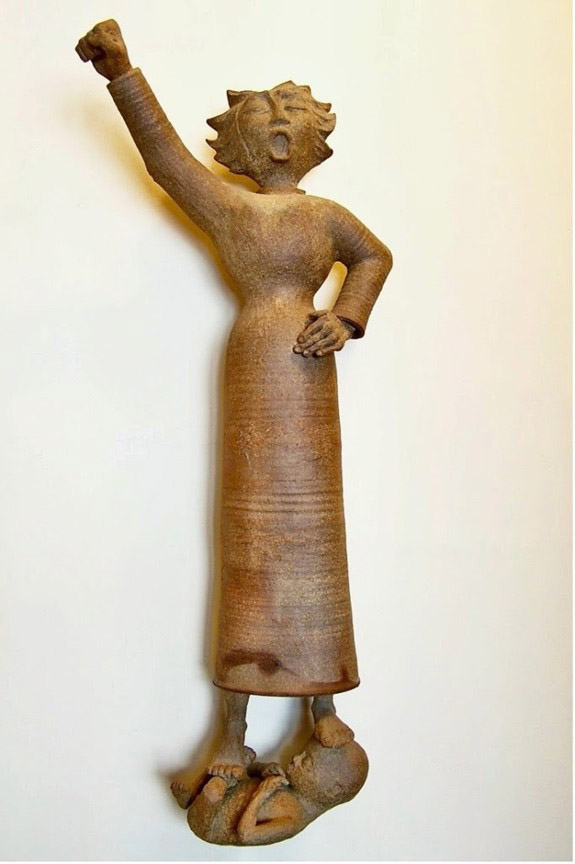 Her 36-inch ceramic sculpture, “Triumph,” depicts a woman—standing tall in victory—her left hand on her hip and her right fist thrust into the air. Her head and hair are back. Her eyes are closed. Her mouth is open in a cry of triumph. Her chest swells in exultation, while her peculiarly elongated legs raise her pridefully high.

Under her feet lies her vanquished baby.

Here we see a mother’s contemporary assertion of dominion over her unborn child, but with her triumphal shout she dehumanizes herself rather than her child.

Indeed, the child is still intact, not yet aborted but only made available for abortion. The point of the sculpture is to depict not abortion itself but the new idea of motherhood that came with the US Supreme Court’s abortion proclamation.