After a powerful storm in Manhattan the streets are littered with “dead umbrellas.” Those ubiquitous five-dollar black bumbershoots, hawked on every street and for sale in every corner store, are now collapsed like fallen, scattered bats, their wings buckled and askew, their hook- shaped plastic tails protruding. With the onslaught of Covid-19, the streets are now littered with discarded latex gloves—a scene resembling marine life, like squid or baby octopi. 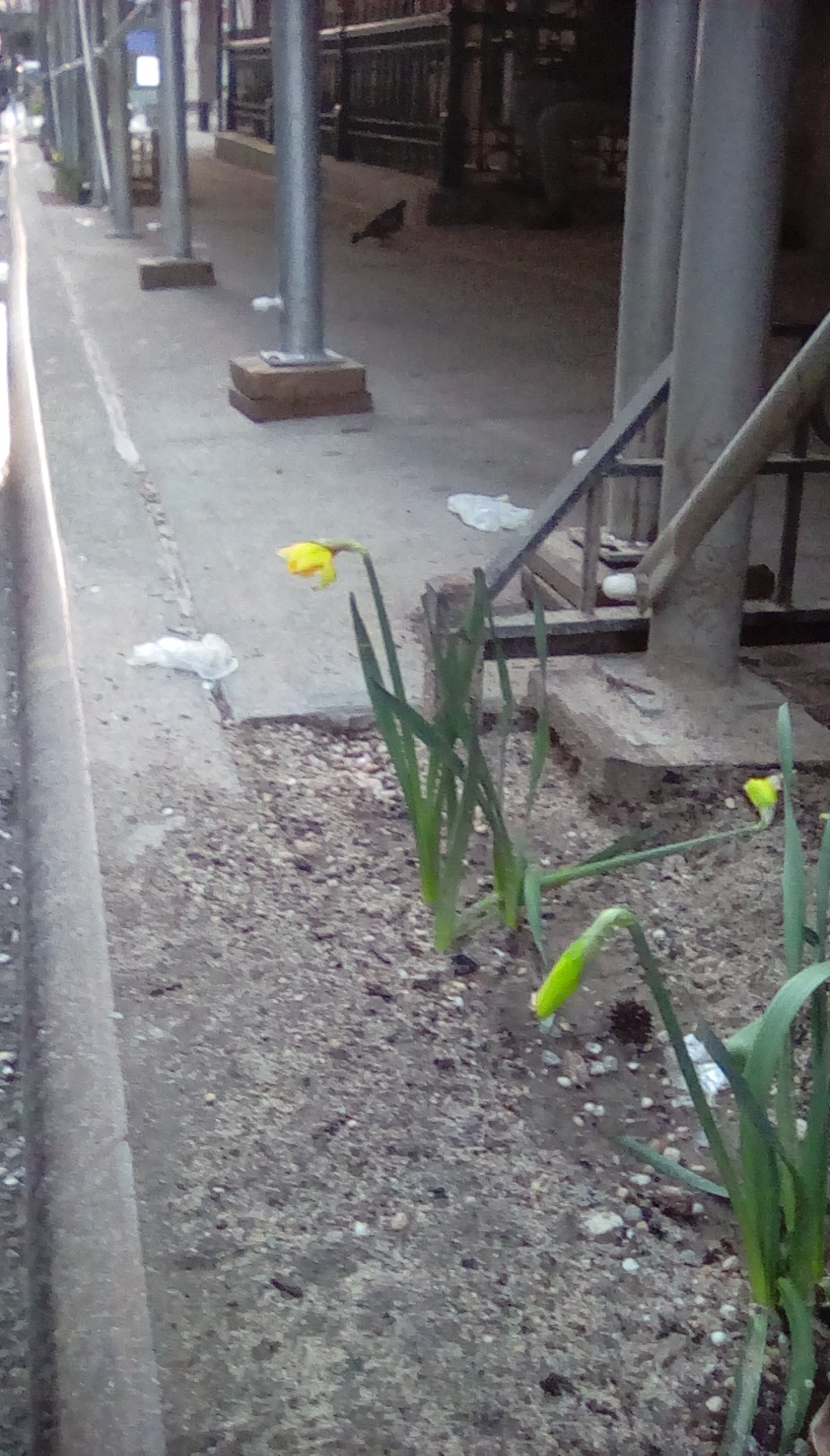 The panhandlers have organized. On the corner, there’s a sign taped to a street lamp urging people to: “SHARE YOUR CHECK- Give generously to NYC panhandlers.” Ambitious, but I suspect it’s mostly the dearth of trusting tourists that’s causing their loss of revenue.  Unfortunately, they seem to have organized in other ways as well. Working as a tag team, two men without face coverings idle in front of a store, standing too close to customers waiting to enter, eyeballing the owner inside. Contribute or else? And there is this: A man walks down the street eating take-out food, bumps shoulders with a well-dressed passerby, “drops” his food on the sidewalk, complains loudly, and the mark apologetically gives him money to replace the lost meal. If you walk past the same spot ten minutes later, you will see the whole scene play out again. (Almsgiving, however, is important. The New York City food pantries are in trouble right now, so . . .)

I’m walking on the street. A man wearing a mask lifts it up, puts his finger on one nostril, blows his nose onto the sidewalk, then lowers his mask. But at least he was wearing a mask, right? Old habits die hard. When this is all over, what precautions might remain? At my local pharmacy, clear plastic shields have been installed on the counters, separating the clerks from the patrons. Every year we have a flu season, perhaps they should remain up, for everyone’s sake.

The subway is running fewer cars. If a user misses the train there’s a 20-minute wait for the next one. Pictures in the paper show folks jammed in like sardines, so the mayor threatens people with police action for not practicing social distancing! Why on earth are they running fewer cars at a time like this, instead of the full complement so people can spread out? Because they’re low on staff right now. A few years back they experimented with automated trains. Seems like a good time (if possible) to implement them, if only for the duration.

People think of New York City as being enormous. The “Big Apple.” In truth, it’s a gazillion tiny neighborhoods. Within one square block of my front door, there’s a supermarket, pharmacy, fruit and vegetable stand, dentist, library, bank, urgent care center, and corner store. And of those eight locations, six are on my very street; very convenient, and even more so with today’s only-essential-shopping warnings. But the City’s provincial character makes me reflect on another aspect of New York—its three most prominent politicians and their aspirations.

Bill de Blasio and Michael Bloomberg tossed their hats in the ring for the Democratic presidential nomination, and a drool puddle is forming on whatever desk Andrew Cuomo is sitting at as he salivates over the prospect that Covid-19 might propel him into the White House. But each of these men has something in common. They are all big fish in a little pond. They are all provincial in their own way.

The media focused much attention on Bloomberg’s stop-and-frisk policy, concluding that it was racially insensitive policing that doomed his campaign. I don’t think so. Voters are concerned about gun violence; the policy—for which the former three-term mayor issued an abject apology—actually might have had national appeal. No. If his campaign had taken off, Bloomberg’s real problem would have been his claim that Manhattan, being a “high-end product,” that is, a place where wealthy people want to live, deserved to be a priority. After all, there’s always the outer boroughs for those who can’t afford the high end. So, come sundown, Bloomberg would have all the housekeepers, nannies, clerks, artists, waiters, dog walkers, teachers, cops, and firemen shuffle off to Staten Island or the Bronx. Does this sound like a man with a national vision? Hey, Mike, you can always buy Samoa and make yourself King.

A couple of weeks ago, an evangelical Christian group, Samaritan’s Purse, led by Franklin Graham, son of the late Billy Graham, set up a field hospital in Central Park’s East Meadow opposite Mount Sinai Hospital on Fifth Avenue. They do this kind of thing all over the world, having, for example, previously treated Ebola patients in Africa and earthquake victims in Ecuador. Today they also have a field hospital in Cremona, Italy. The City helped with logistical support. Then word came to de Blasio that the LGBT community didn’t approve because these particular angels of mercy don’t believe in gay marriage. Horrified, the mayor chided the volunteer first-responders for not respecting “our values,” and made assurances that the situation “would be monitored.” We are a city of over eight million people, not all of whose values overlap with the mayor’s. Still, municipal muscle was brought to bear lest, in the midst of a terrifying pandemic, this one faction in America’s most populous city should feel put out. Is this a man who has his priorities straight? Is that a national vision, or small-town backbiting?

Cuomo is the progressive governor who in 2014 presumed to warn us that New York State is not a place for conservatives! How’s that for serving all of the people? Recently, he announced that he hopes to make New York State “the fetal stem-cell capital of the country.” Well, after signing into law last year a bill that allows abortion through the ninth month of pregnancy, our boy’s well on his way to providing the means for the next round of baby-brain harvesting. Will he want to make America the fetal stem-cell capital of the world? This is a guy with his finger on the pulse of our nation?

Now for some nice news. The daffodils are out. They don’t last long, but so gentle and brilliant while they do. I pass some on the sidewalk when I do my essential shopping. They’re sharing space with the street “squid,” and maybe the jarring juxtaposition is apt for the times. But they’re daffodils nonetheless, and, as they don’t last long, let’s all pray that this crisis won’t either.