In 1965 I was a high school sophomore in suburban New Jersey. A short course—some kind of home economics, I think—was taught every year. It wasn’t about baking pies and such, but about balancing checkbooks, making and keeping household budgets, that sort of thing. All girls. Boys got shop (no girls). The course was taught by an old man, or at least old to us at the time. He was probably in his late sixties. An old-school gentleman, he was tall and lanky, always nicely dressed in a crisp suit and tie, well groomed, possessing a quiet manner, and . . . enchanted with the breasts of young girls.

This was common knowledge among the female students; girls who had already taken the class would make cryptic comments about his penchant for inappropriate touching to some of us who had just started. My first experience with it was seeing him do it to another girl. He was leaning over her shoulder inspecting her work when she suddenly flinched, and then looked mortified and confused. He smiled and said soothingly, “there, there,” or something like that. Then, still smiling, he serenely moved on. She gave a quick, panicked glance around the room, as if asking, “Did that really happen?”

Throughout the following weeks I saw it happen again and again. Thing is, he wasn’t the least bit ashamed or furtive about it. One time he was standing near a girl, gazing at her chest with a wistful smile, and then calmly reached out and stroked her breast as if he were petting a bunny rabbit! The girls’ discomfort never registered with him, he would just murmur one of his “there, there’s,” as if his was an authentic role, as if it were part of the lesson. And indeed, it was confusing. If he jumped a girl in an empty classroom the transgression would be obvious, but this? He didn’t escalate his behavior; his ways weren’t rough, just maddeningly demure. But it wasn’t right, and he’d been doing it for years.

Girls, including myself, started spending the class hunched over our desks. He seemed to take the hint. So we sat up. And he started in again. With me. I didn’t see or hear him come up behind me. Feeling his hand on my breast, I turned around and looked up to see him smiling, as if he had just paid me a compliment. Before he could sail away, I said: “If you ever touch me again I’ll break your arm.” A look of total shock and dismay came over his face, and he proceeded to do what he felt was his duty as an educator of young women—he went to the guidance counselor’s office and reported me as being an “aggressive female.” 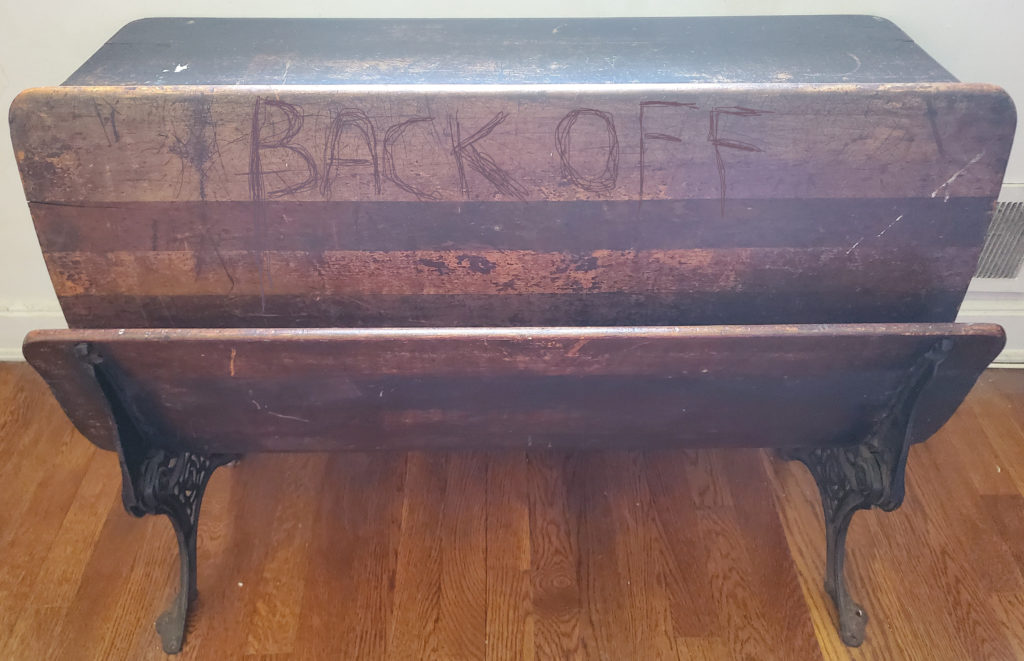 The other girls in the class went home and told their mothers, the mothers called the school, the lady teachers heard of it and two distinct sides formed up around the issue; male teachers on one side and women on the other. I said nothing. I figured if it followed me home, I’d tell my side of the story and let the chips fall where they may, no sense looking for trouble. Although the “aggressive female” characterization was histrionic, over the years my parents had become rather well acquainted with my less than satisfactory teacher reviews. I hated school. I was a day-dreamer.

It followed everybody home. The men-on-one-side-women-on-the-other-side theme extended to mothers and fathers. I don’t know what went on in everyone’s house, and I don’t know that all the dads were unsympathetic, but neither do I recall any of them siding with the women against the other men outright. The position of the men, teachers and fathers alike, was that no damage was done, the old gentleman meant no harm, he was just enamored with sweet youth, and the women were being very unkind to him. He’d been a respected teacher for decades and this scandalous chatter was needlessly tarnishing his reputation as he entered his golden years. Interestingly enough, he’d never tried this stuff on the female teachers. They were shocked when the news came out. So it wasn’t a fetish he couldn’t control. And it wasn’t just being circumspect about co-workers. He apparently didn’t feel he was doing anything wrong as long as his touching wasn’t seriously sexual in nature, and only involved unattached young girls; the adult women belonged to other men, either husbands or suitors, and that’s what made them off-limits. In his mind he was just “showing us the ropes” in a low-impact fashion. His thinking didn’t meet with disagreement from the other men.

It followed me home. My mother heard from a friend’s mother what had happened, and that the female support was solidly behind me. But my mom still had some motherly concerns about my role, namely threatening to break the old man’s arm. Now, it should be noted that it was bravado on my part. I never would have attacked him physically, I was just trying to bring a point home, especially after the hunching-over-our-desks strategy proved futile. We were in the dining room, with my father across the way in the living room reading his newspaper, one ear cocked. My mother said I had good reason to be angry, but it’s never right even to threaten violence. I agreed, and said I was sorry. “But certainly,” she continued, “the teacher is wrong and his behavior must not be tolerated.” And then to my father, “Wouldn’t you agree?” in the form of a question but one where the answer is assumed to be in the affirmative. My father snapped his newspaper and said, “It’s what she’s on earth for and the sooner she realizes it the better.” I’m not sure he really thought that (I’m not sure he didn’t), mostly he just wanted to support the consensus of the other men. I thought the top of my mother’s head was going to blow off. She got red in the face, and lofty sentiments about eschewing violence evaporated. Through clenched teeth she said: “If that dirty old man ever touches you again, hit him where it hurts as hard as you can, and if that school makes trouble for you”—flinging her next words into the living room— “I’ll have my father hire you the best lawyer there is!” Dad’s head snapped back, then he buried it back in his newspaper. Nothing more was said.

Were that teacher younger he might have been regarded as more of a threat to the other men, but as it was they just saw him as a nice old guy finding innocuous comfort in youthful flesh (shades of King Solomon!) and it was our “place” not to make a big deal about it. When put on a set of scales, our privacy weighed much less than his loss of face. Not put on the scales was how it felt to have to show up for that class every day. This one-sided view manifested in other ways. If a teenage girl got pregnant with her first boyfriend and found herself a wife and mother at a very young age, it was considered “starting early” but none-the-less “what she was meant for.” Whereas a teenage boy winding up married to the first girl he ever had was a calamity, a tragic loss of the “sowing wild oats” rite of passage. And it was her fault. Sowing of oats wasn’t only about sex, but being at liberty to wander and explore his world, to experience freedom before settling down. To find himself. Families of means might send a daughter on a European tour before marriage, but that was sight-seeing with a chaperone. Finding herself was never important. This is what women of my generation grew up with, which was not unique per se; it had always been like this. What was unique was that this generation welcomed Roe v. Wade.

Choices. The right to privacy. The right to make decisions about your own body. It was intoxicating. Those noble platitudes about woman’s specialness because of our ability to give the gift of life were hard to reconcile with the day-to-day realities of perching on that ever-present set of scales opposite the needs and privileges of men and always coming up short. And besides, being able to have an abortion doesn’t automatically mean one is going to abort! Before Roe v. Wade there were girls who had them. It was hush hush; it was shocking; it was last resort. Why would that change? But it did. It snowballed. All of it. Abortion has been normalized to the point that liberal politicians praise it as a social good. The right to make decisions about your own body should now include deeming prostitution just another job. Female eggs are a crop. And a baby has no intrinsic significance unless you happen to want it. That snowballed too. It started out with displacing the “you can’t be a little bit pregnant” standard with parameters of viability, and now the discretionary right to deny life extends even after a first breath is taken. Once again women are sitting on a set of scales, but this time they are opposite babies, and the babies are the ones on the light end. Gentlemen, you reap what you sow.