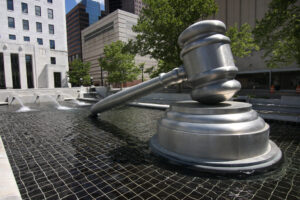 “Giant Gavel” by Sam Howzit is licensed under CC BY 2.0.

Pro-abortion Michigan officials are scrambling to ensure that if the U.S. Supreme Court overturns Roe v. Wade, women in the state will still be able to get abortions. On Tuesday, Court of Claims Judge Elizabeth Gleicher suspended a dormant abortion ban that had been superseded by Roe.

“After 50 years of legal abortion in Michigan, there can be no doubt but that the right of personal autonomy and bodily integrity enjoyed by our citizens includes the right of a woman, in consultation with her physician, to terminate a pregnancy,” Gleicher argued.

John Bursch, attorney for Right to Life of Michigan and the Michigan Catholic Conference, said Gleicher should have recused herself from this case. Her preliminary injunction was advocated for by Planned Parenthood of Michigan, an organization Gleicher has admitted she supports.

According to AP News, “Gleicher, who also serves as chief judge on the Michigan Court of Appeals, informed the parties in April that she makes annual contributions to Planned Parenthood and, as a lawyer, represented the organization in a 1997 abortion case. She said she didn’t feel it should disqualify her.”

Gleicher’s clear conflict of interest aside, this injunction is significant because it represents how states will be responding to abortion issues in the coming months. Michigan may have a Republican-controlled legislature interested in protecting life, but it has a Democratic governor and, more importantly, at least one judge with a demonstrated bias for one side.

The Michigan legislature could still file an appeal, but the judiciary wields great influence in this sphere.

“This is the kind of mess that you end up (with) in the court system when the state’s chief executive and its attorney general refuse to uphold and defend the law that has been in place since 1931,” Bursch said. “They may not like it. But no one has the ability to unilaterally ignore, change, encourage the invalidation of Michigan law. They should be working through the democratic process just like anyone else.”

Madeline Fry Schultz is a writer in Washington, D.C.