On the Erasure of History

America recently has been roiled by wholesale efforts to erase history. Monuments go missing in the middle of the night. Undergraduate snowflakes demand “trigger warnings” before they read a book that might tackle somebody or something ugly, hateful, or even controversial. Plaques memorializing long dead parishioners disappear from church walls because contemporary worshippers cannot find space to pray under the same roof another sinner prayed under two centuries earlier. Even Yale—which might otherwise sneer at long ago papal prudes who commissioned loincloths to cover up nude figures in Michelangelo’s “Last Judgment”—has plastered over a statue of a Puritan holding a musket aimed at an Indian (oh, sorry, “Native American”), doing it in such a way that future restorationists may not be as successful as Fabrizio Mancinelli was in cleaning up the Sistine Chapel.

Now, I am no defender of Confederate monuments. As a New Jersey boy, temporarily living in Virginia, I have never felt comfortable about memorializing traitors like Robert E. Lee. 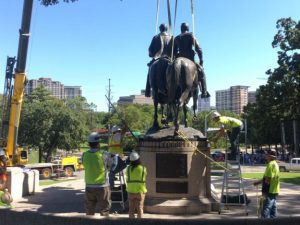 But I also know that there are folks here—mistaken I think—who believe there is another side to Lee’s treason. And I know that history is rarely black and white. The past demands to be looked at.
And that gaze has always been uncomfortable for sinners (i.e., all of us), especially those who want others to believe in their righteousness. In an article in the December issue of First Things, Marc Barnes warns us that “vilification of the past to aggrandize the present only obscures the past.”  Maybe obscuring the past is what it’s really about.

In the sorely underappreciated 1984 film adaptation of  A Christmas Carol, Ebenezer Scrooge (George C. Scott) and the Ghost of Christmas Past (Angela Pleasence) reflect upon the happy life Scrooge’s erstwhile fiancée Belle has found for herself. When Belle expresses a word of sympathy for Scrooge, the remark so stings the miser that he lashes out against the Ghost: “As for you, I’ve had enough of your pictures from the past. Leave me! Take me back. Haunt me no longer!” Scrooge then wrestles with the Ghost but seeing that she was “undisturbed by any effort” on his part, tries to crush her beneath a candle extinguisher, convinced—as Dickens puts it—that her light on the past was “connect[ed] … with its influence over him.” The past, which “cannot hear you,” cannot be allowed to be as it was because what it was disturbs the present.

The Spirit dropped beneath it, so that the extinguisher covered its whole form; but though Scrooge pressed it down with all his force, he could not hide the light: which streamed under it, in an unbroken flood upon the ground.

What’s at work in Scrooge’s unsuccessful attempt to extinguish the light and in our culture is nothing less than the erasure of history. And while its most egregious aspects seem only now to be coming into sharper relief, the roots have been there a long time. They positively infect Roe v. Wade and its progeny.

Roe itself was born of illegitimate history. Justice Blackmun distorted the whole of American, indeed, Anglo-American, anti-abortion legislation—which had been progressively arriving at a greater protection of the unborn—by accepting revisionist accounts arguing that 19th century laws were meant to protect women from quack abortionists rather than unborn children from destruction. (For a good critique, see https://www.amazon.com/Dispelling-Abortion-History-Joseph-Dellapenna/dp/0890895090 )

But Roe’s erasure of history goes much further than this. Not only did the ruling exclude the unborn from civil protections enjoyed by other human beings, it made it possible for votaries to claim that unborn children don’t even belong to the human race.

When Indiana recently adopted legislation to require the humane disposition of the remains of the unborn—given the record of their having been dumped like trash or even incinerated with pet remains—a federal judge struck down the rules as unconstitutional. If a state has no interest in “potential life” before viability, it cannot have any interest in that “potential life” which is now dead (but which does not mean that it was alive before). Like Creon in Antigone, it’s not enough that Polynices is dead: it is essential that he not be buried.

When Montana proposed to show the same mercy to a second or third-trimester fetus that is normally extended to a dog before it’s euthanized—that is, administering anesthesia— “Catholic” Democratic Governor Steve Bullock promptly vetoed the bill.

When Texas included the slain unborn child of Crystal Holcombe as a victim of the mass murder in Sutherland Springs, the New York Times felt the need to explain to its readers why the benighted Lone Star State had counted 23 dead instead of 22.

When states require pregnant women to be informed of the facts of fetal development at the stage at which they propose to have an abortion, or to show them an ultrasound of their baby, the abortion establishment and anti-life “bioethicists”—who normally cannot get enough of the doctrine of “informed consent”—rail against “propaganda” and “imposing viewpoints” (as if sonography invents a picture of what is in a woman’s womb according to the pro-life bent of the state where it’s used).

(We pro-lifers have in part abetted the trend. Once upon a time, the disturbing visual of an aborted baby, sliced, diced, burned, or abandoned in his own blood in the bottom of a surgical bucket would appear on picket signs. Yes, it was graphic, but it was real. A picture is worth a thousand words … and out of sight is out of mind).

Roe has been about erasing history for 45 years because the fact is that—despite invocations of hard cases—the vast majority of abortions have been performed for reasons of convenience, not because the life of the mother was endangered or the unborn child was conceived in rape or incest. Roe has always been about erasing what happened at a given historical moment by erasing the person conceived at that moment … and then pretending as if nothing happened.

In Planned Parenthood v. Casey, the O’Connor-Kennedy-Souter plurality opinion contended that Roe could not be overruled because “[a]n entire generation has come of age free to assume Roe’s concept of liberty in defining the capacity of women to act in society, and to make reproductive decisions.” Now, two generations have grown up under the rubric that the human problem posed by an unwanted pregnancy can be “solved” by erasing history and eliminating the human. If we have grown accustomed to that audacious leap, removing a couple of old bronze statues or dusty epitaphs should be a piece of cake.