It was an overcast afternoon ten years ago when all hell broke loose. A massive earthquake hit off the Pacific coast of Japan, rocking buildings from the Sendai area—where it was the strongest—all the way down to Tokyo and farther south. The quake-wracked ground broke open in places, oozing black sludge. Entire grocery-store inventories were shaken off shelves and onto the floor in an instant. People held on to walls and heavy furniture, unable to stand up in the violent swaying. Trains ground to a halt on the tracks, forcing commuters to walk home if possible or take shelter anywhere they could. Lights went off and stayed off. Water stopped coming out of faucets. Telephone lines went dead.

And then it got worse. A mammoth tsunami, in some places more than a dozen yards high, flooded coastal villages with an angry, blue-black wall of seawater. Cars were swept away like bits of bark on a swollen river. Big fishing boats hurtled over swamped seawalls and plowed, almost cartoonlike, into buildings inland. Disintegrating houses were sucked under the waves. People ran—as many as 20,000 didn’t make it.

I was not in Japan when the disaster struck, but an acquaintance describes the scene she witnessed that day. She and her mother took refuge in a neighboring middle-school gymnasium, clambering up onto the catwalk running around the interior perimeter. From there they watched in horror as the sea rushed in, turning the gym into, as she puts it, “a giant washing machine.” People who had not arrived in time to climb up to safety were whirled around and around in the cold ocean water below—a mad mix of broken glass, splintered wood, and faces frozen in half terror, half disbelief. Then the current shifted and the water rushed out the doors, taking everyone who had been on the gym floor with it.

Later, TV news showed the aftermath. A vision of hell displaced the ordinary afternoon routine. Dollhouse towns bulldozed into heaps. Shellshocked survivors lining up amid the ruins for blankets, rice, and water; others looking for the missing. It wasn’t long before the entire scene was bathed in withering radiation from the busted-up Fukushima nuclear plant.

Japan, and the world, rallied around the victims. The northeast region has fought tooth and nail to recover. Today, things are much better, of course. But there are still many who remain homeless. there are areas too irradiated to enter, much less live in. And there are those who will never return, swept out to sea, lost forever to the deep.

In this our Covid year, my mind returns to ten years ago, when, in just a few moments, the world turned upside down for so many Japanese. We too are beset with unexpected death, albeit occurring over months, not in seconds. We too are reminded that our lives are not our own. That all time is borrowed time. The breath we just took is all we can be sure of. The dead teach what only the living can learn—that life is a gift, and each hour a cause for giving thanks.

Americans, and many others around the world, seem to have forgotten this. We have spent the past year arguing about politics. Who gets to sit in this chair; who gets to pound that gavel. Watching footage of the Japanese earthquake and tsunami, how silly our current preoccupations seem. How cruel television anchors and politicians today sound, speculating about whether the number of Covid dead will affect election results. Those who by some miracle survived the disaster ten years ago were not, at the moment they were facing death, asking God to spare them so that they might debate a political opponent. I remember hunkering down in a hallway in America not long after the earthquake hit Japan, bracing for a huge tornado to hit our house. All I could think about was the safety of my family, and how much it would hurt our little dogs if the storm were to rip them out of our arms. Thank God, the angel of death passed by our door that day; it could have been very different. 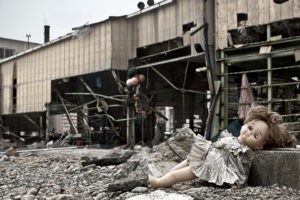 Everyone is naturally pro-life. We instinctively protect our own and long to protect others, too. Politics is built on the illusion of control, and at its extremes opens spaces in which we are told we can justifiably take innocent human life. When we speak of a culture of death, this is what we mean. We mean the political shell that enables us—even encourages us—to act in heartless ways towards the weak, the infirm, the unborn.

But that is the opposite of who we are meant to be. Our human nature is to love and hold, not to lay waste and murder. This March 11, as we stagger somewhat shellshocked out of our Covid year, perhaps we can pause to remember that our lives do not belong to us. And that each moment is a grace and a blessing, a chance to embrace and affirm life—not denigrate it.