The Reason I Jump

The Reason I Jump is a remarkable film, a powerful documentary directed by Jerry Rothwell, that invites viewers to experience autism—from the inside.

How is this possible? The idea for the film came from a groundbreaking book of the same name by a 13- year-old severely autistic Japanese boy, Naoki Higashida. Though non-verbal, Naoki’s ability to communicate was unleashed by a therapeutic method called rapid prompting, which involves using a letterboard, or “alphabet grid.” As Naoki explains, “The alphabet grid makes it possible to form my words by simply pointing to their letters, instead of having to write them out one by one. This also lets me anchor my words, words that would otherwise flutter off as soon as I tried to speak them.” He says the method was difficult at first, but “What kept hammering me away at it was the thought that to live my life as a human being nothing is more important than being able to express myself.”

The book The Reason I Jump, published in Japan in 2007, is laid out as Naoki’s answers to a series of questions. British novelist and screenwriter David Mitchell, and his wife Keiko Yoshida, themselves parents of a severely autistic child, translated the book into English in 2013. What resulted, says Mitchell, who is interviewed in the film, felt as if they had been sent “an envoy from another world,” and, for the first time, “It felt like our son was talking to us.”

What do you think I’m feeling when I’m jumping up and down and clapping my hands? I bet you think I’m not really feeling anything much beyond the magic glee all over my face. But when I am jumping, it’s as if my feelings are going upward to the sky. Really, my urge to be swallowed up by the sky is enough to make my heart quiver.  . . . when I jump, I feel lighter, and I think the reason my body is drawn skyward is that the motion makes me want to change into a bird and fly off to some faraway place. 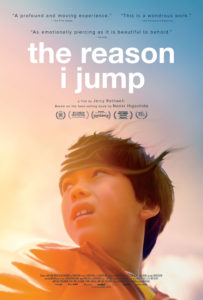 When director Rothwell became intrigued by the film project, he visited Higashida in Japan. Now 26, Naoki was excited about the prospect of a film, but did not want to be in it. And so Rothwell used Naoki’s words themselves as a jumping-off point (pun intended) for a new direction, and the documentary became a trip around the world to visit five severely autistic persons and their families. Two of them, Ben McGann and Emma Budway, great friends since childhood who live in Virginia, only vocalize with grunts and noises, and yet we witness them using their letterboards to communicate—with their families, with each other, and in class–and it’s mind-blowing. They are highly intelligent, keenly aware, articulate—and deeply attached to each other.

Amit Khurana is a young woman in India, whose inner isolation and extreme, persistent anxiety are relieved by what she expresses in her—amazing—art. Joss Dear is a young man in England whose parents Jeremy Dear and Stevie Lee, co-producers of the film, first brought the idea to Rothwell. Joss’s story is perhaps the most heart-wrenching, as we see through home movies this beautiful happy boy with a shining love of water, sand, and certain sounds, turn into a young adult so tortured by anxiety that he becomes violent and assaults his parents. They had to make the painful decision to put him in a residential setting. The fifth person is a child, Jestina Penn Timity, who lives in Sierra Leone. Her family speaks of a whole other aspect of autism—that in the culture where they live, disabled children were traditionally considered as demonic! Jestina’s family has founded an organization in Sierra Leone to aid disabled children and their families and counter such damaging attitudes.

There is a second powerful way this film portrays autism from the inside. Interspersed with the visits to families are scenes of a young boy, Jim Fujiwara—also autistic and nonverbal—alone in different natural settings, with a voice narrating passages from the book. The film and audio are meant to immerse the viewer in the sensory world of those with autism. Children with autism were once described as “out of it”—as shut off, and unfeeling, lacking both awareness and empathy. We know now that the reason those with autism seem “shut down” is not because they don’t feel things, but because they feel things too much. We neurotypicals have a way of integrating our sensory input, so that we can focus, for example, in an office where a fluorescent light may be making a slight buzzing sound and there are also footsteps in the corridor. We can edit those distractions out and focus on the task at hand. Those on the autism spectrum have heightened senses—all five of them—and because of that, sounds, sights, touches, can all assault their senses in cacophonous and alarming ways that make it impossible for them to focus. They retreat into themselves as the only way to stop the assault.

Q 37. Why do you flap your fingers and hands in front of your face?

Flapping our fingers and hands in front of our faces allows the lights to enter our eyes in a pleasant, filtered fashion. Light that reaches us like this feels soft and gently, like moonlight. But “unfiltered” direct light sort of “needles” its way into the eyeballs of people with autism in sharp straight lines, so we see too many points of light. That actually makes out eyes hurt.

“Ah don’t worry about him—he’d rather be on his own.”

How many times have we heard this? I can’t believe that anyone born as a human being really wants to be left all on their own, not really. No, for people with autism, what we’re anxious about is that we’re causing trouble for the rest of you, or even getting on your nerves. . . . The truth is, we’d love to be with other people. But because things never, ever go right, we end up getting used to being alone, without ever noticing this is happening. Whenever I overhear someone remark how much I prefer being on my own, it makes me feel desperately lonely.

For families of children with autism, the book and film might be a wake-up call. David Mitchell writes in his Introduction: “Naoki Higashida’s writing administered the kick I needed to stop feeling sorry for myself, and start thinking how much tougher life was for my son, and what I could do to make it less tough.” I had a similar reaction.  And for me, this film, although at times heartbreaking to watch, has a crucial message: We live in a culture that dismisses the disabled as “less-than”—a tragedy, because that is a rejection of the deeply mysterious ways God has created human beings. And there is a universal message, I think, for all parents: Rather than harping and nagging our children to do this or that, to be this or that—enter in first to who they are, and what they might be trying to tell you. Even for neurotypical children, challenging behaviors are an attempt to communicate.

When my son (now 26) James was a toddler, before we realized he had autism, one day I looked at his serene little face and I “saw” Antoine de Saint-Exupéry’s “Little Prince.” I was giving James a bath after dinner, and he had some pieces of pastina–the tiny star pasta that is often Italian babies’ first solid food—in his golden curls, and I suddenly got this overwhelming sense that he was our “Little Prince”—sent to us from beyond, mysterious and otherworldly. I tried several times to write a poem to capture that moment, but, alas, I’m not a poet. Yet the scene flashed to my mind when I read Naoki’s answer to question 58:

Q58. What are your thoughts about autism itself?

I think people with autism are born outside the realm of civilization. Sure, this is just my own made-up theory, but I think that, as the result of all the killings in the world and the selfish planet-wrecking that humanity has committed, a deep sense of crisis exists.

Autism has somehow arisen out of this. Although people with autism look like other people physically, we are in fact very different in many ways. We are more like travelers from the distant, distant past. And if, by our being here, we could help the people of the world remember what truly matters for the Earth, that would give us quiet pleasure.