The Statue of Liberty’s Arm 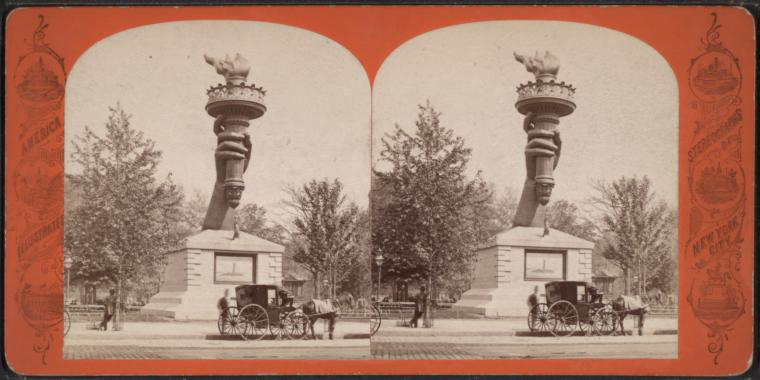 No, the picture that accompanies this blog isn’t a still frame from the original Planet of the Apes when Charlton Heston, seeing Lady Liberty’s beached head, realizes in horror that he hasn’t traveled to another galaxy but rather to a future America where war has reduced everything to rubble. It’s a late-19th-century gelatin silver print of the Statue of Liberty’s disembodied hand holding her torch, which sat in Madison Square Park (E. 23rd and Madison Avenue, Manhattan) for six years until the rest of the statue—a work in progress back in France—could be completed. Philadelphia, Boston, and New York all fought for it, but New York won out because Madison Square Park was available. Souvenir photographs were sold, and for 50 cents people could climb a ladder to the balcony of her torch. New York City lore has it that courting couples went there on dates. How’s that for “meeting cute”? What a great story for their grandchildren!

Frédéric Auguste Bartholdi designed the sculpture, and work began on it in the mid-1870s. The head and torch-bearing arm were completed first and exhibited for publicity purposes at international fairs. The arm was displayed at the Centennial Exposition in Philadelphia in 1876, and then in Madison Square Park from 1876 to 1882. It had been agreed that the French would pay for the statue and the Americans would pay for constructing the pedestal. Raising money in the United States, however, was difficult. People here weren’t exactly eager to contribute, and by 1885 work on the pedestal was endangered due to lack of funds.

Publisher Joseph Pulitzer of the New York World started a drive for donations and got more than 120,000 contributors—most giving less than a dollar—and the pedestal got built. When completed, the statue’s separate parts were shipped in crates to America. Finally, on October 28, 1886, the fully assembled statue was dedicated on Liberty Island (previously known as Bedloe’s Island). A broken shackle and chain lie at her feet as she walks forward, honoring the recent abolition of slavery, and the painful Civil War that helped bring it about.

The event occasioned New York’s very first ticker-tape parade, and the dedication ceremony was presided over by President Grover Cleveland. Tycoon Benjamin Richardson rode in George Washington’s carriage in the parade. I’m guessing he gave more than a dollar.

What would have happened if the fundraising drives had failed and there was no place to put the rest of Lady Liberty when she arrived in New York?! All of her sections couldn’t be stored in tiny Madison Square Park. Would one foot wind up in the Bronx and the other in Brooklyn? The arm that holds the book in Queens? Her skirt on Staten Island? If there were an 1880’s version of the Circle Line, would her crowned head peer out from the deck as she went round and round and round Manhattan with no final destination in sight? Liberty in pieces for lack of a foundation?

National unity is the foundation of a successful republic. Because of our sadly divided nation politicians today talk about the importance of unity, but how to get past mere lip service and actually achieve it? What steps can be taken to turn catchphrase into reality?

Democratic politicians must take responsibility for their role in dividing our nation by refusing to accept the results of the 2016 election. In encouraging their base to do the same they set neighbor against neighbor, friend against friend, and divided families on a scale not seen since the Civil War. Bread lines foment unrest. So do double standards. Democrats didn’t condemn thugs wearing black hoods rioting on Trump’s inauguration day; Nancy Pelosi ripping up the president’s State of the Union speech and Maxine Waters urging the public to harass Republican officials in restaurants went without censure. They gave a wide berth to violence and looting as long as it connected to politically correct causes. They have been lackadaisical about anti-trust laws when it comes to Big Tech because the censorship benefits them. Disrespect also foments unrest. They engaged in non-stop ridicule and slander of half the country for four years. They went too far.

Democrats aren’t the only ones who need to do some soul-searching. Republicans must also take a hard look in the mirror. They never liked Trump, they were just greedy for his voting bloc. All they wanted were warm bodies to pull a lever for the Republican ticket, while ignoring, or trying to ignore, what created that populist movement in the first place—a deep connection to “Drain the Swamp.” Did they ever really listen to or care about what these voters were crying out for, or did they simply hope to co-opt them and derail a crusade, i.e. politics as usual? Trump was greedy too. His correct place was as an Independent candidate, but he wanted the prestige of gaining office with the approval of a major party and being linked to a high-class brand—The Party of Lincoln.

Republicans and Democrats must acknowledge their love affair with the D.C. Swamp and end the relationship. Career politicians occupying Senate and House seats for twenty, thirty, even fifty years is not democratic representation; it’s a bi-partisan royal family whose cronyism they both enjoy.

What both Democrats and Republicans should do is push for education reforms so that civics class begins in grade school and continues through high school and college—and that it be hands-on. Not just Class Presidents but Class Senators and Class Congress people too. Law school has moot court to gain trial experience, likewise schools could hold simulated Senate and Congressional hearings to gain procedural experience. Government process taught along with reading, writing, and arithmetic. “Going to Washington” shouldn’t mean an elite class entrenched forever, but a truly diverse body within reach for the many. It’s said that politics is like making sausage; we enjoy eating it but we don’t want to see it made. We’re not enjoying it today, and it’s high time more of us bear witness to how it’s being made.

Most important is what we can do for ourselves. We must resist the destructive ploy of politicians enticing people to identify so much with a political party that it replaces their own identity and descends into tribalism. We must also resist the destructive ploy of mass media, and increasingly social media, which thrives in dividing us. Whether Left- or Right-wing leaning, media corporations boost ratings—and profits—by hyping our differences and stoking viewer anger.

Neither party is likely to energetically pursue term limits, even though last week Ted Cruz (R-Texas) and five other Republican senators introduced legislation to do so. They may be sincerely committed, or this may be just throwing a bone to an electorate fed-up with business as usual in Washington. Ultimately it may be up to us to make it happen. Perhaps it is time for another party—if it can draw from both sides and do much, much more than simply split the vote. A party with a founding principle: Never elect the same person more than twice. That’s term limits.

There was a time when the Statue of Liberty was in pieces waiting to be put together and the arm holding her torch was brought to a small park in a large city. People climbed up to the balcony of her torch and stood above the din and looked out from a viewpoint not yet iconic. Some of them held hands and dreamed of a future together.