WASHINGTON—During last Friday’s March for Life, participating families talked about why the issue is so important.

“I just want it to end,” Christina Bogdan said of abortion with visible emotion Friday as she and her 11 kids joined the many other families in the nation’s capital participating in the March for Life 2022, protesting the 1973 Roe v. Wade decision legalizing abortion.

Like many of the families in the crowd, Bogdan has a personal connection to the issue.

“They wanted us to abort him 20 years ago,” she told the Register, gesturing to her son Andrew, who has Down syndrome. Bogdan has been joining in the March for Life for 35 years, bringing her children to witness for life. They traveled from Bucks County, Pennsylvania, to participate this year.

The Supreme Court’s possible willingness to overturn Roe v. Wade in the Dobbs v. Jackson Health case has given her a lot of hope. “I never thought I’d see this day, that we’re so close, despite everything that’s against us; we’re so close, and look at how many young people there are,” she said.

She added that the many young people at the march are a source of renewed energy: “The young people are aware the truth is there.” She said parents “need to speak up” to their kids about the importance of the pro-life issue.

Charbel Rizk, a Maronite Catholic from Raleigh, North Carolina, made the six-hour journey to march this year with his five children. “It’s the most fundamental issue—right—it’s life,” he told the Register. “Everybody seems to be fighting for justice, and so this is the most fundamental. If you don’t have the opportunity to live, what else matters?”

Regarding the possibility of Roe being overturned, he said that he was more concerned with reaching hearts and minds on the issue. “I’m more focused on really getting people to care enough. Laws always reflect the majority of society, so when the majority in this country realizes that abortion is wrong … the Supreme Court is no longer relevant anymore.”

Mary Rose Somarriba traveled from Cleveland to march alongside her husband, Gabriel, and two of her four children. Her 9-year-old daughter, Inez, marched beside her with a handmade sign that read: “A baby is a person in and out of the womb.” Her son, Vinny, was balanced on his father’s shoulders, carrying a sign that said: “Babies Need Love.”

“I’ve come over the years to stand up for unborn lives because the babies can’t speak for themselves,” Somarriba said.

“I did think it’s a big year to march and show our support.”

Regarding the Dobbs case, she told the Register, “I don’t know if Roe will be overturned or not, but, either way, our country needs a lot of healing, and women need a lot of support in facing their unplanned pregnancies.” That’s because pushing abortion “really pushes women into corners more than many people realize and makes them think that they can’t have children and careers and success or other passions in life,” she said. These women “deserve compassion and support, and they deserve a chance at reaching their goals and living beautiful lives.”

Katherine Michael, a medical student from Virginia, spoke with the Register near a “Love Them Both” sign outside the Supreme Court at the end of the march. She was holding her two young daughters, who she had while in medical school, and said she wanted “to be an example that it’s possible and that it’s actually fighting the negativity of the society, allowing us to embrace our fertility and motherhood, while still contributing and doing other things really well.”

“I’ve been coming out for a few years now, and we really like standing with other people and letting them know that pro-life people exist and that we’re here, whether abortion is legal or illegal, to support and protect women and children,” she said.

Michael, who is specializing in maternal and child health, said that while she is a Christian now, she first became pro-life from a secular background.

“It was just my moral compass that brought me against abortion initially,” she said, “realizing that it wasn’t serving women the way I had thought it was, when I was younger. And then I came to Jesus and realized even more that there’s so much more to life and so much value in life, that it’s important.”

Being People of Life

The Sisters of Life, whose order is devoted to the pro-life cause and provides resources to vulnerable abortion-minded women, participated in the march this year with a lot of prayer surrounding the case before the Supreme Court.

“We’re praying for the end of Roe. We’re praying for the Dobbs case to be successful,” Sister Marie Veritas, who traveled from the Bronx, told the Register. She added that “no matter what happens with legislation, we still need to be people of life and for life and really helping women, to give them a lot of the support they need—not just to choose life, but to flourish.”

“To come today, in this time of solidarity and to stand for life, to stand for love with our brothers and sisters here, that’s one of the most powerful witnesses we can give to the world, especially this year on the possibility of Roe falling,” she said of their participation in the march. “What every person here wants to let women know is that we want to cherish you in your motherhood and support you in that.”

Sister Faith Marie told the Register that while this year “there’s a poignancy with Dobbs in the air,” regardless of the outcome of the case, “we love coming to actually show the dignity of every human person is worthwhile.” 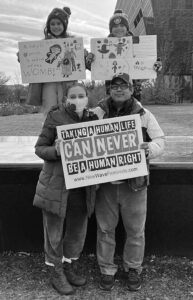 The Somarribas at the March for Life