Always at this time of year, Robert is present in the minds and hearts of his family and friends—we share memories, eat his favorite beef-and-potato meals, or raise a pint of Guinness in his honor. He was an extraordinarily loving and affectionate man, a huge (6’4” and, ahem, well-fed) teddy bear of a guy. He was also a deep thinker and articulate writer. At the time of his death, he was heading up our anti-abortion lobbying office, the Ad Hoc Committee in Defense of Life, which back then had an office in Washington DC. 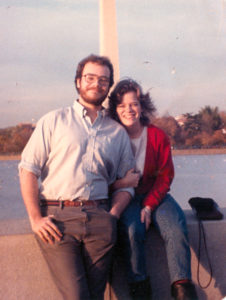 Before he died, Robert was working on an article about the pro-life movement and violence. There had been several shootings at abortion clinics, including the 1994 killings of an abortion doctor and a clinic escort in Pensacola Florida by anti-abortion protestor Paul Hill. After Robert’s death, I wrote “Why My Brother Won” for the Human Life Review (Spring 1995), in which I included some of Robert’s unpublished work.

As I recall in the article:

Robert and I used to commiserate with each other about this: how the violence allowed the media to paint us all as extremists, how frustrating it was to see the harm that the Pensacola killings did to the movement. I remember one day last August, a few weeks after the Hill shootings. I was sitting at home waiting for my then-overdue baby, and Robert was at home recovering from his latest round of chemotherapy. Both of us had seen, on separate talk-shows, a priest arguing for the “justifiable homicide” of abortion doctors.” As Roman Catholics, we were appalled to see a man in a Roman collar espousing such views.

In the weeks since the 2020 election, many Christian and Catholic friends or colleagues have written me about how they were fasting and praying “for the election”—that the results could not be accepted, we simply had to pray harder. God would turn things around if only we pray hard enough! But I wondered: How do we know? How can we be sure of God’s will? And my brother’s words came to mind:

It is never correct to say that God is on our side. It is in fact quite presumptuous. He is not here to do our bidding, after all. All we can actually hope for is that through our own choices we will put ourselves on God’s side of things. Of course, where we mess up is that we desire it to be the other way around, and then in our minds make it so. We bow to the temptation to have God on our team, with ourselves as coach.

Of course, there were thousands of prayerful and peaceful citizens who came to Washington, DC on January 6, 2021, hoping that God was on their side. But there is no way of getting around what happened. And there are consequences.

Public perception is a crucial element in any struggle in the public square. It is so much harder to prove your position if the populace is not sympathetic to your side. Currently, to the dismay of many, pro-lifers are being perceived as angry, violent radicals who will hurt you if you don’t agree with them. This perception is unfair when applied to the anti-abortion movement in toto but it accurately defines an increasing minority. . . . The answer to all this is a Chestertonian paradox. In order to win this struggle, we must avoid trying to win it. We must do what we do against abortion not because this or that action will secure us a victory but because it is right to perform that action. We can fight endlessly for good, moral legislation to save unborn children, but with the willingness to lose a fight rather than sacrificing principles to win. We can try to remember Christian charity and compassion for those among us who are risking their chances of eternal happiness by fighting against God. Instead of hating these people, and trying to hurt or terrify them, we should be praying for them, and treating them with the basic civility Christians used to be known for . . . We must continue to educate, to provide the calm voice of reason and logic to counter the often hysterical rantings of the other side.

For over 45 years, thousands of marchers have gathered annually in DC to protest an unjust law—peacefully. Though the media doesn’t admit this, the numbers for the March for Life are enormous. And yet, it is always remarkably calm, and marchers are overwhelmingly considerate of the police, as I have witnessed time and time again. Because to respect human life is to, well, respect human life and abhor violence.

What will the March for Life be like on January 29, 2021? Will our movement be scapegoated? Will we be silenced? Will there be violence?

As night fell on January 6th, I thought of Robert, and the meaning of Epiphany—God revealing Himself to us. I wondered what sort of epiphany had been revealed this awful day. I don’t presume to know, but I trust, always, that God can bring good out of evil.

Here is how I concluded my article about Robert:

If I were coaching God, Robert would have won his fight with cancer, and be here to write this himself. I and many others certainly lobbied hard for that. But the worldly failure, for us believers, is really Robert’s gain, because he is with God.

And, whether you are a religious person or not, Robert’s thoughts may help to make sense of setbacks in a struggle for the good. When our attempts to educate the world about abortion seem to fail, we have to remember that lives are saved one at a time, and that, successful or not, we may not abandon the moral path. Hatred and violence only hurt our cause and harden people’s hearts.

Robert’s way of hope and faithful perseverance is the only way to truly win.